Lastnight I let insecurities about my experience level in high country get to me. In the end I decided to get up and give it a try. The worst that could happen is my feet would be wet and turn back if I felt to beyond my ability.

I found a good place to cross Tyndall creek which looked far less appealing yesterday. Before crossing I removed my socks and crossed in my trail runners. It’s a reality now that shoes will see alot of water in the Sierra’s and this is the first crossing that has no other option. The water level was now only about calf high and very easy to cross. Note that it’s about 6:30am and still in the 30’s. Once across I dried my feet and put on neoprene socks I’d purchased in Lone Pine. My feet quickly warmed up.

I thought this freezing pattern was interesting.

Here is Forester Pass, the low point on the ridgeline just left of center. Note the tiny looking patch of snow we will be crossing. You can also make out a zig zag of the trail to the right.

Above is the trail as it approaches the snow chute crossing 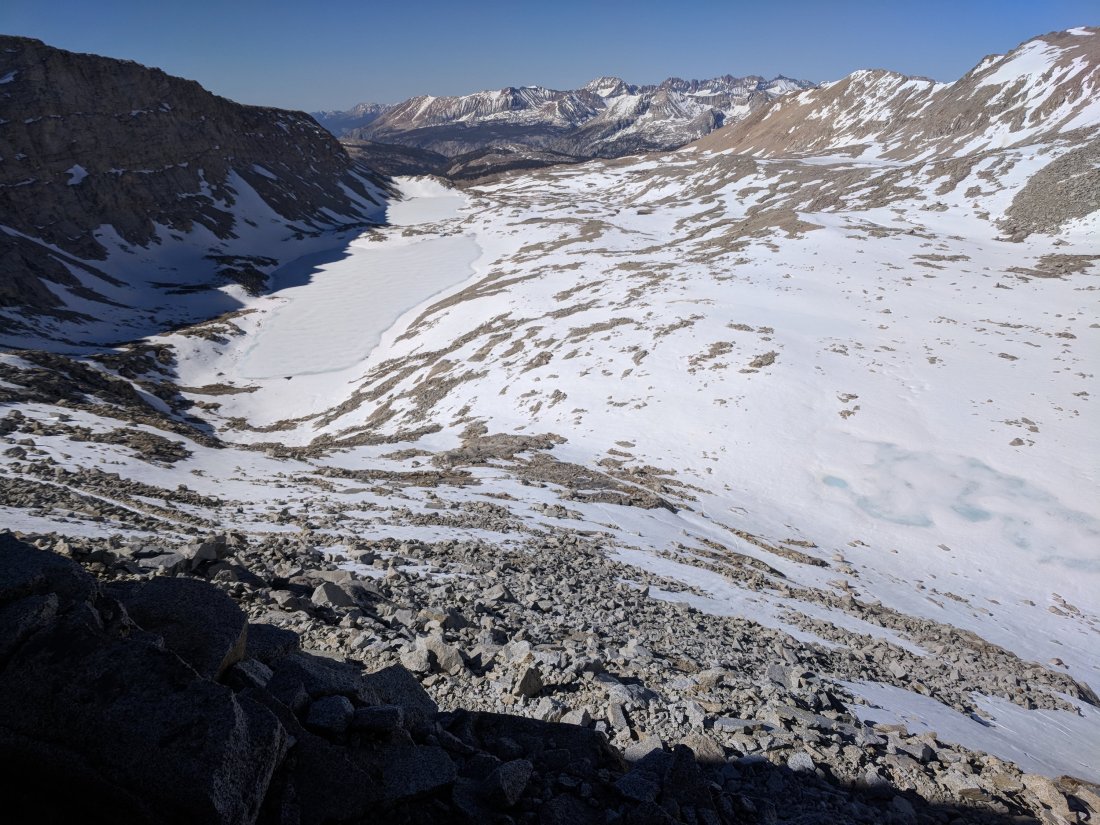 Looking back down the valley where I’d camped at the treeline in the distance. I can make out a few hikers coming behind.

Here was the moment of truth, the snow chute of Forester Pass in front of me.

Many will give opinions about using an ice axe to cross here. I didn’t have any prior experience in using an ice axe although did watch some others practicing on a snow bank below Whitney yesterday. The experience of climbing Mt Whitney was really a good opportunity for me to get the feel of crossing steep snow.

In the end I decided not to use the ice axe partly due to not being comfortable with it, the run-out of the chute was short meaning that if I had fallen I don’t think there would be enough time to arrest myself before contacting the rocks below. Finally, the path across the chute was very well defined and firm/frozen in the morning shade so my microspikes were gripping very well. I shortened my right trekking pole to account for the slope and took the first steps, just stay in balance and make well placed steps I told myself!

By the time I decided to go for it Miles to Go and Flashgordan quietly arrived behind me. They took a video of me crossing.

Here is Miles to Go making his crossing. You can see the slope is steeper than 45 degrees and the rocks below the chute.

What a relief to have Forester complete, now to get down the northern side which has far more snow. It was now 9:30 and the northern side snow was getting soft which makes walking much more difficult and postholing becomes a possibility.

Here is the northern side looking back up at Forester Pass. This was still a steep traverse. You can see the trail crossing this snow field.

Headed down to the valley below

I was feeling good now and just continued walking. Before I knew it Glen Pass was getting close. I ended up continuing to summit this pass and arrived alone at 6:00pm.

Above is another hiker named Sunrise I believe. It’s about 4:00pm prior to getting up to the pass. You can see he postholed up to his groin here. After this he decided to camp for the night and finish the climb in the morning.

Above are views on the way up to Glen Pass.

Here is a view from the summit and the first snow traverse down the northern side. 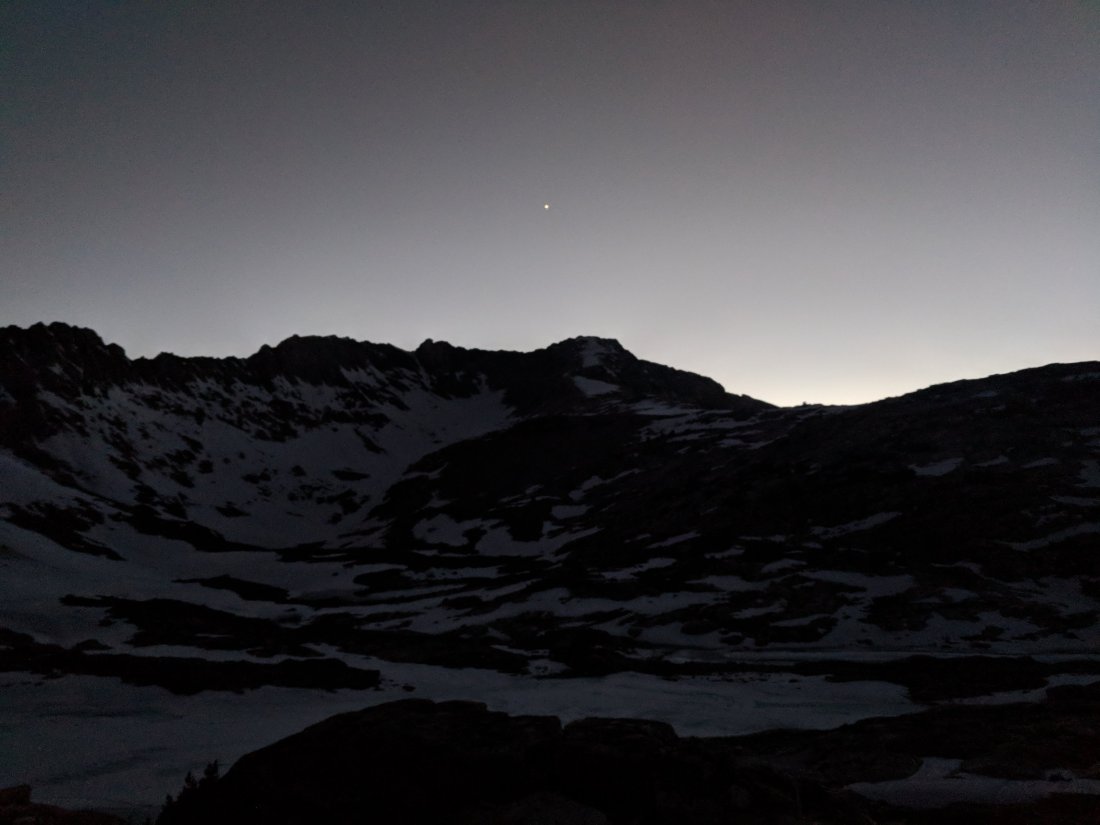 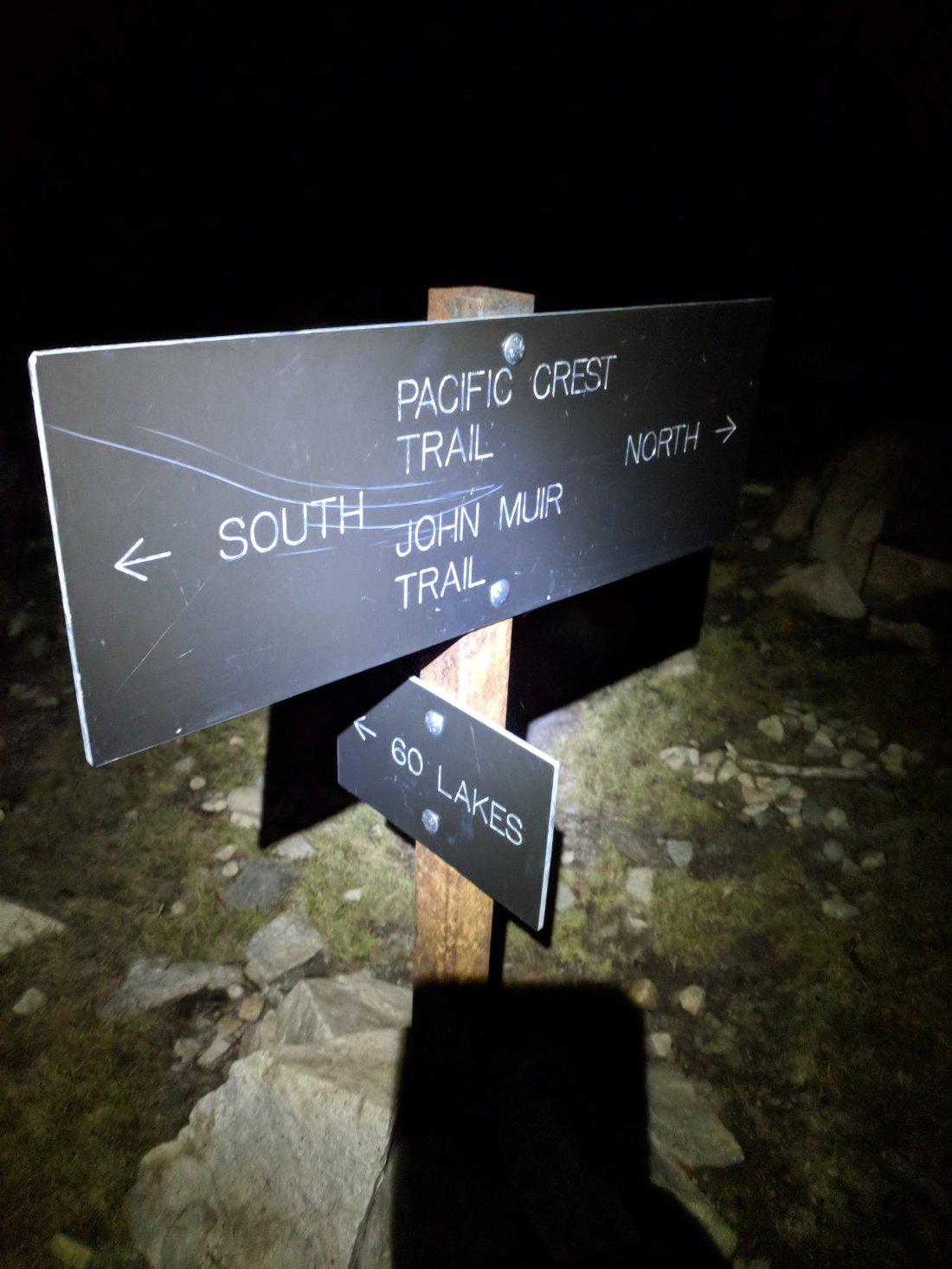 After I arrived at the summit I decided to wait until the sun set hoping for the snow to start freezing. The decent went well, snow was still to soft but the paths footing was cut in well enough. About 3/4 of the way down I noticed another hiker coming down behind me. I chose to wait for this person because chances are there wasn’t anyone else around for a few miles. Usually hikers camp as near to the summit so that they can get up and over a pass before the sun softens the snow. Soft snow causes postholing where each step sinks to unknown depths, often scraping against hidden objects.

This hikers name is Pierre from France. I asked if he’d like to pair up until we found our way to the first viable camping spot a few miles away. He said that’d be great. It was now dark enough to need a headlamp and we followed foot prints in the snow and occasionally needed to refer to GPS on my phone to find the trail.

At Rae Lakes now,9pm, one lake flows into another and required another water crossing. This isn’t a typical flowing stream with dangerous catch points, rather an area flowing between still water on either side. It was a bit strange. My shoes were already wet so I proceeded to wade through. This went to about knee deep and about 30ft to cross. I won’t be crossing water at night again as it is very difficult to judge depth. Once across I saw Pierre taking off his shoes and socks. I thought to myself this isn’t really a good idea as bare feet are very unstable on submerged rocks.

Sure enough, he fell backwards catching himself but not before partially dunking his pack. He went back to shore. Since my shoes were already wet from crossing I asked what size shoe he wears. Size 12 he replied, so I removed my shoes and threw them over to him. He put them on and crossed easily.

Later, I thought it was pretty dumb throwing my shoes across a flowing water crossing at night! Had I missed the throw I would be completely screwed without shoes! This is where a long day, wet, cold and dark turned to poor judgement. Fortunately we were soon on our way down the trail and minutes from setting up our tents. We arrived at 10:30pm, relieved to get some sleep!